Living in a city like San Francisco, there’s a very clear and distinctive classism among certain sectors of society. I’m sure it’s the same in cities all over the world, but I live here and this is where I’m most observant of it. Admittedly, I’ve caught myself on the “wrong side” of that divide, having treated people differently based on how they were dressed, but I’m repentant for having done so. I strive to treat everyone as equally important, and to empathize with their situations. It’s not any better, but I find myself being more judgmental of the “haves” than of the “have nots.” I try to be even, though, but I find the people in higher-income situations have a tendency to be far more disconnected from the realities of the rest of the world than the opposite, and I can’t easily treat someone as an equal who doesn’t do the same to everyone else.

Despite having been raised as a Welfare Kid, much of my retail-working life has found me working in the highest-end retail outlets. High end grocery. High end fabric stores. Even high end garden centers. The run-of-the-mill places always seemed to elude me, for whatever reason. Perhaps it’s a sense of self-worth that made me recognize I’m capable of “rising above” even in retail. Who knows. I humbly recognize that where I am is, in fact, retail. That’s not to demean it by any means, though I’ve encountered plenty of people whose opinion is obvious that retail workers are subhuman. Within all these places, though (and I do mean all), I’ve interacted with workers who act like they’re better than everyone else because of the reputation of the establishment, or that their position within the business is more important than all the others.

A decade or so ago, I ran into this very situation while out shopping one day. My partner at the time wanted a new wallet for Christmas. A wallet from Gap would not do, oh, no. Even Macy’s was not going to fit the bill, oh, no. Kenneth Cole had some lovely wallets, but even those were not the one. This partner, bless his late soul, was a victim of appearance-is-everything attitude, and would take the label off of his $110 Armani black watchman’s cap that he had to have, and keep it to pin onto a $1.99 Walgreen’s orange cap, or red cap, or whatever the color that day was going to be. Once he’d “been seen” in something, he couldn’t possibly wear it out again. Certainly not to a club, anyway. But at least he creatively made that label’s dollars stretch, and shopped recycled clothing as much as possible.

The wallet that was needed was to be from Hermes. (“But this is an investment! I know I go through clothes like crazy, but a wallet is different. I’ll be able to use it several times! Plus, it’s a name that I can recycle for a premium.”) I worked at the time at Britex Fabrics, the high-end fabric store off Union Square, right next door to Hermes. I had to dress nicely for work in the neighborhood, and enjoyed doing so. I popped over to Hermes on my lunch break one day to scope out the one wallet.

Hermes is one of those designer names you see in Vogue and all the style-conscious fashion mags that dictate what people are supposed to want to look like. The Union Square shop that vends this name has multiple small rooms and galleries, and all the pocket-size merchandise, such as the one wallet, is kept within locked glass cases. Each room and gallery has one or more employees, dressed to the nines, with nose in the air. In French, the layman’s term for snooty attitude is “il pète plus haut que son nez.” He farts higher than his nose.

I engaged someone whose nose was well out of reach of gas clouds to disdainfully open a case for me so that I could examine the one wallet. I was politely informed that the one wallet is $800, and would it still be necessary to open the case. Yes, it was. I examined it. I turned it over in my hands. I opened it. I closed it. I determined that it was, in fact, just a wallet. I handed it back with a “thank you” and left to ponder the worthiness of the one wallet.

We had our Christmas bonuses, and I decided what the heck. I may as well just get the damn wallet for him. We’d had some major struggles for the first six years of our relationship, and the past year had seen some remarkable changes in habit. The reward was expensive, but far far less so than our previous lifestyle as club-goers had been. I would get him the one wallet.

The next day, I set forth on my journey from home. It was my day off, so I was wearing jeans and a t-shirt, and was not dressed like I would be for work in Union Square. That was my bad choice that day. Or was it? Is appearance really that important? I would argue strongly against that, but I have to recognize that it does get you different treatment, like it or not. I got to Hermes, and took a quick look through the rest of the boutique. Figured I might as well see what all was there. There was a cashmere scarf I liked, but I was only budgeted for a wallet that day and didn’t need another damn scarf anyway. Eventually, I made my way to the glass case with my name on it. The one containing the one wallet.

And I stood there. And I stood there. I made eye contact with several employees, literally not one of whom was engaged with any customers. Suddenly it started to dawn on me that I was being ignored because I wasn’t dressed nicely enough to be taken seriously as someone who would actually spend money there. These employees obviously had forgotten that they were working retail like me. They thought they were better than, because of where we were. It pissed me off, frankly. So I stood there a few minutes longer. Finally, I’d had my limit. Apparently my $800 wasn’t going to be good enough for them.

I made eye contact with an employee for the third time, and raised my eyebrows as if I were going to ask a question. His head cocked to one side and his nostrils flared with the now-familiar disdain. And I farted. I mustered up a good one, too. I farted. I pushed and pushed, and it was loud in the quiet boutique. People turned to look. And I continued to fart. It petered out at long last. I pushed again and got one last little wet-sounding toot. I don’t think anyone there had ever encountered a fart before, at least not that they would ever stoop so low as to admit to. Mouths were open in disbelief, and it was beautiful.

“Keep your nose out of that one, assholes,” I thought as I walked away, without the one wallet. 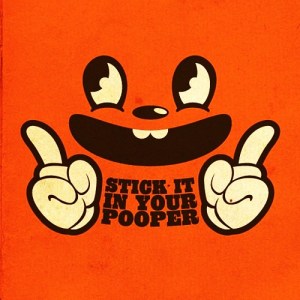 I work at Flora Grubb Gardens nursery in San Francisco as buyer for the design team, and am a student and freelance gardener certified in Landscape Design, Construction, and Maintenance, and Nursery Center Operation and Cut Flower Production. I study Ikebana, and am an obsessive student of the Earth Sciences, with an emphasis on ecology and sustainability. I’m an avid blogger, and contributing writer to Pacific Horticulture magazine. That’s all school study. The real education comes in exploring what’s around me and sharing my vision. Thoreau said, “It’s not what you look at that matters, it’s what you see.” I have a unique eye on the world, and love sharing my perspective as much as people seem to enjoy seeing how I see things. View all posts by Zann Cannon Goff

One thought on “Farting at Hermes”

All content Copyright © Zann Cannon Goff and zanncannongoff.wordpress.com. Unauthorized use and/or duplication of this material without express and written permission from this blog’s author and/or owner is strictly prohibited. Excerpts and links may be used, provided that full and clear credit is given to Zann Cannon Goff and zanncannongoff.wordpress.com with appropriate and specific direction to the original content.